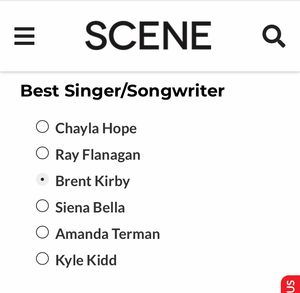 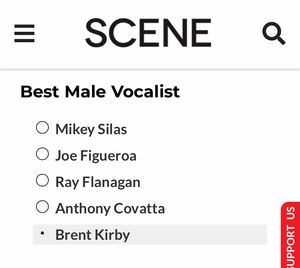 Please vote for Brent Kirby for both categories of Best Male Vocal and Best Singer/Songwriter at the following link: 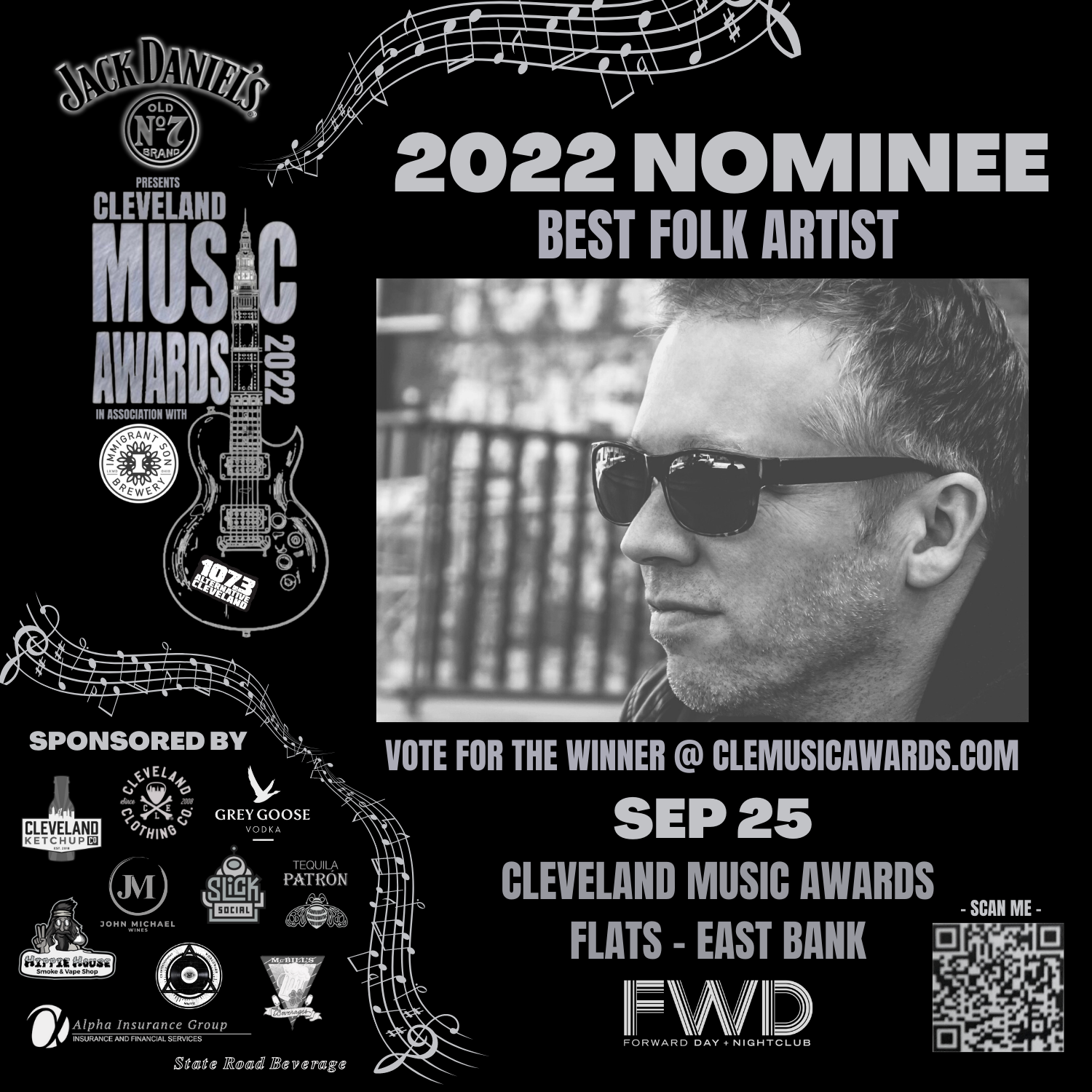 Brent Kirby was nominated for Best Folk for the 2022 Cleveland Music Awards. You have to vote in order for Brent to win. Please follow the link and vote, vote, vote!

Cleveland Magazine's feature story on the resurrection of the 10 x 3 Songwriter Showcase hosted by Brent Kirby! 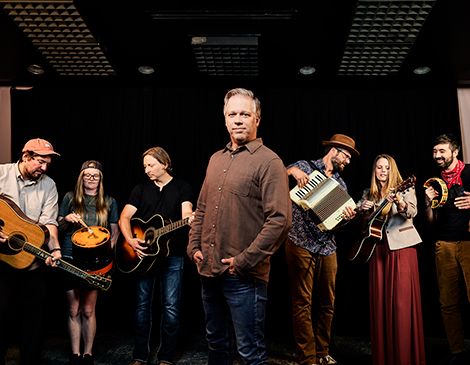 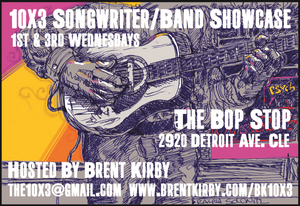 Brent Kirby’s long running 10x3 Songwriter/Band Showcase will make it’s return at The Bop Stop at The Music Settlement on the first and third Wednesdays of the month starting August 3, 2022 from 7pm-10pm. The 10x3 abruptly ended its nine plus year weekly run when the Covid-19 shutdown closed down all music venues in March of 2019. The concept of the 10x3 is a pre-arranged line up with 10 songwriters/bands performing three songs each, two of the them required to be original and the third can be the artist’s choice of original or cover. The Bop Stop is located at 2920 Detroit Ave. Cleveland, OH 44113. 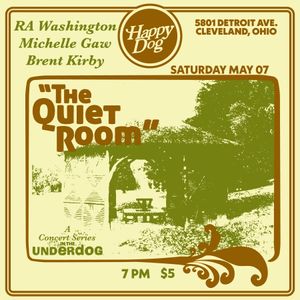 On Saturday, May 7, at the Underdog, the Happy Dog’s downstairs bar/performance space, local singer-songwriter James Pequignot will launch the Quiet Room, something that'll become a monthly event featuring acoustic performances by local talent. The May 7 concert will feature Brent Kirby, RA Washington and Michelle Gaw, three local singer-songwriters all cut from very different musical cloths. The show starts at 7pm.

The Ohio Arts Council awarded Brent Kirby and Midview School District (Grafton, Ohio) a continuing grant for a Songwriting Residency for the 2021 fall semester. This will be the fifth consecutive residency for Brent at the school district. He will focus on writing and performing original songs with the choirs, and leading a daily, dedicated songwriting class. The songwriting class will focus on a complete approach to songwriting, including multiple techniques for creative brainstorming, lyrical writing, detailed anatomy of song form, musical terms and theory, listening and analyzing different styles of popular music, Garage Band song creation, historical perspectives, studio production and terms, collaboration, and music business. Brent has documented a curriculum for the class, and is working on refining that for further use. Huge gratitude to the Ohio Arts Council for their support with this project! Please visit https://www.oac.ohio.gov for more info on all the incredible programs the OAC supports!

Brent Kirby and Ray Flanagan performed as a duo for a part of the Rock Hall's 2021 Induction Celebrations. The two performed in the Rock Hall's interactive display "The Garage", which features instruments that visitors can put their hands on and play. The ROCK x CPL event was hosted in partnership with The Cleveland Public Library and is powered by PNC Bank. The virtual event featured music performances from Cleveland musicians, Brent Kirby and Ray Flanagan, music education activities curated by the Rock Hall’s award-winning Education team, activities and stories with the Cleveland Public Library, and an instrument show and tell from Keep Music Alive

Brent and Ray played Brent's songs "I Am Soul", and a brand new tune "The Good Ones". In addition, they partnered on Ray's songs "Only Thing It Takes", "Over The Hill", and "Stupid Sound". Engineer Jim Stewart was there to capture the audio.

Ray Flanagan “Over The Hill” https://youtu.be/jwAEn3UyESU?t=1214

The Sunday Classic and The New Soft Shoe

For the year of 2022, Brent will continue his residency with ther Sunday Classic and The New Soft Shoe at Forest City Brewery in the Atlantic Beer Garden or the Waldorf Room.

Continuing the 12 year tradition, The New Soft Shoe will perform from 7pm-10pm every second Thursday of the month. Best to get your seat early for this one. All Gram All Night!

The Sunday Classic, featuring Brent and his friends Ray and Russ Flanagan along with Ed Sotelo, will get together on the 4th Sunday of the month from 3pm-6pm to play original songs and off the beaten path covers. Come and join them for a relaxing Sunday of backyard party music.

In Brent Kirby, a lot of hope, faith, truth and music is traversed.
A true believer.
-Holly Gleason, No Depression

"When The Lights Come On Again" song and video released to benefit Cleveland Rocks, Past, Present and Future

On Friday, Feb. 12th, 2021, the song and accompanying video for "When The Lights Come On Again" was released. It completes a long journey for co-collaborators Brent Kirby and Ariel Karas (Opus 216). The idea was hatched in April of 2020 with the purpose of directing fundraising for the Cleveland music scene and venues, with the active non-profit Cleveland Rocks, Past Present and Future the recipient. Led by Kirby and Karas, the song was written collaboratively over email by 18 songwriters and musicians, who all wrote and videoed their unique parts for the song, which were then put together cohesively by Kirby and studio engineer Jim Stewart. The completed song was mastered by Adam Boose of Cauliflower Audio, and the video edited by Goldfarb Weber Creative Media.

The goal was to create a fundraising tool for Cleveland Rocks, Past, Present & Future, and to spotlight Cleveland's diverse music scene, culture and independent music venues.

For more information and to donate to the cause, please visit clevelandrocksppf.org